Requip’d – The Equipment Rescue Company combines upcycling and great design. Changing the world, one stick at a time. 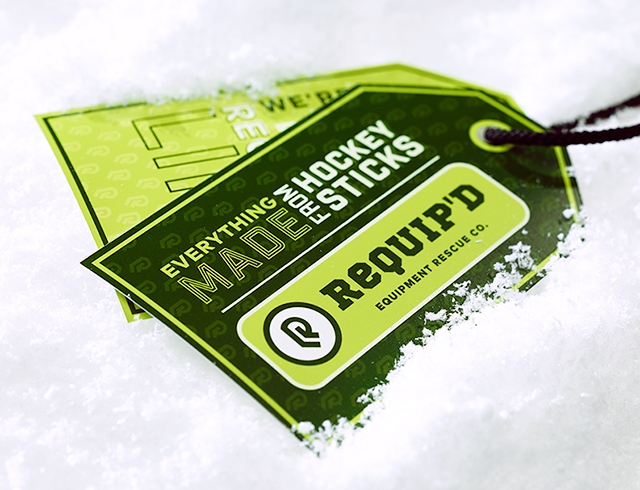 DDW SF, a leader in sustainable packaging design practices recently teamed up with a new player in the sustainability world: Requip’d – The Equipment Rescue Company.

The “upcycling” concept was the brainchild of Requip’d founder John Ufland and Eric Bourgoujian. As part of John’s weekly ritual of playing hockey in a Los Angeles based men’s beer League, Ufland saw how many broken sticks were piling up and heading to landfills.  Ufland and Bourgoujian saw an opportunity to give them a second life by repurposing them into functional products like BBQ tools and golf putters.  And the Requip’d concept was born.

“Once people saw what we were doing the demand took off as every team wanted to recycle their sticks and sell the BBQ tools in their team store,” Ufland noted as he points to the ice scrapers, golf putters and brooms that they now make.

Partnering with teams and manufacturers around North America, Requip’d began upcycling thousands of hockey sticks into unique high quality BBQ sets.  The Requip’d product line has grown to include other must have products for hockey players, and fans. The story continues to grow as Requip’d is now expanding their “green” solution to other sports including baseball and lacrosse.

Ufland enlisted the help of fellow beer leaguer Ross Patrick who runs a branding and packaging design firm in San Francisco. The decision to rename Hat Trick BBQ into Requip’d was made as the previous name was limiting the company to all the possible products they could eventually produce from the used sporting equipment.

“Our team came up with the name Requip’d to allow the brand to expand beyond hockey, while putting their mission front and center. We gave a nod to hockey in the brand mark we designed and created packaging worthy of the bigger mission of doing something to reduce waste and help the environment.” says Executive Creative Director Ross Patrick of DDW SF. “It was fun to rename and rebrand the company as we knew that this was a smart, sustainable company that was going to expand and develop tons of new products. The possibilities are limitless”.

To date, Requip’d has recycled over 40,000 hockey sticks and represents almost every team in the NHL as well as AHL, Junior and college teams in the US and Canada.

Former LA King Superstar and long-time friend of Ufland, Luc Robitaille was instrumental in launching the company  and is a big fan and personally uses his Requip’d BBQ set as often as he can. They’ve become a great fundraiser at charity events for teams and fans.

“As more brands begin to think about the future of sustainability, upcycling is one of the smartest ways to address the issue,” says Mike Goefft Managing Director of DDW.  “Sportswear giant Nike recently revealed that 71 percent of its shoes and apparel today contains recycled materials, some of it derived from its own production leftovers. Nike Grind is producing shoes within what Nike calls the “closed loop”—that is, the fewest possible materials assembled in ways that allow each product to be readily recycled into new products.”

“Another great example is Levi’s® Waste<Less™ collection of products,” says Patrick.  “Products in the Levi’s® Waste<Less™ collection are made of 20 percent post-consumer waste — specifically, recycled plastic bottles. That works out to an average of three to eight plastic bottles per pair. To date Levi’s has used 11.9 million recycled bottles for it’s jeans.”

“And if that’s not impressive enough, Menicon has helped Starbucks to pioneer fermentation technology that now allows coffee grounds from Starbucks stores in the Tokyo area to be converted into feed for local dairy cows that produce the company’s milk,” according to Starbucks.

DDW sustainability efforts for Sprint resulted in a glue-free kraft box with soy inks, water-based coatings, and no plastic whatsoever. This was followed by a life cycle assessment company to measure the magnitude of these improvements with impressive results.

“Sprint’s sustainable packaging turned out to be an effective way to connect with customers.” Says Goefft.

It also put Sprint on Newsweek’s Top 500 Greenest Companies two years in a row. It earned DDW a couple of design awards as well — namely the American Graphic Design & Advertising’s “Best of Category” Award and the Creativity International Award for “Best Green Packaging.”